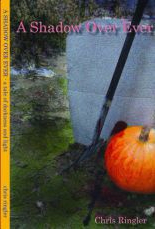 Sometimes I still have to stop and blink my eyes a few times to realize that I have put novels out. When I first started writing I didn’t have an interest in writing novels. My ideas were to write short stories that were like punches to the face or stomach. Something that made an impact and HOPEFULLY left you breathless in one way or another. I am not sure if that ever happens or not but I just never thought I’d write a novel.

The first, A SHADOW OVER EVER didn’t start as a novel, something I got into when I released it, but it ended up that way. Like the Meep books, I just couldn’t leave a story hanging on a cliff. That’s a crummy thing to do. Sure, you can write a story in a way that leaves things with more to say, with unanswered questions, but there should be an ending. A proper ending. Even if there is more after a story ends, like life, you should answer your questions and leave the reader satisfied.

SHADOW wasn’t going to be more than one story but I kept leaving him in spots where there was something unfinished and then POW, a novel.

CEMETERY EARTH always had the potential to be something larger and darker. It’s a novel of short stories but there’s a throughpoint, a connector, and that’s Hunter, the lead character, who is joined by a second lead. Writing it story by story it was easy to look at it that way and not as one larger piece. It didn’t become that larger, interconnected piece until I started editing it and filling in holes in the narrative and the timeline.

That book, my zombie novel, sat abandoned for a good many years as I waited for the zombie craze to pass. I knew I wasn’t going to get the book done before the fad was over so I sat on it. The last thing you want to do is be the last one at the party and I didn’t want to be putting out a zombie book when people had moved on to the next thing. Imagine my surprise when THE WALKING DEAD changed that and pushed the craze further than I had imagined. I finally reached a time when I had to finish the book.

I had to get it out.

With SHADOW I had the novel done but couldn’t figure out how to pitch it correctly when I had the opportunity and after that I couldn’t find anyone that’d put it out. I loved the book but if no one else did, what was I going to do.

It’s a fun, and weird story. It’s the story of an angry hillbilly who ends up embroiled in a war for Heaven and Mankind. A story that starts small but becomes something larger than any one character in it. It is about everything and nothing as seen through the eyes of the man whose hate wouldn’t let him die. It’s silly, it’s mean, and it’s strange.

With CEMETERY it was a matter of waiting out a fad that never quite ended.

That book began in 2000. SHADOW began in 1994 with a short story. Both books took over a decade to reach the end of their journeys and completion. It was never so much doubt in the story as it was doubt in me.

But I love Hunter. I love the world of the undead. I love that I twisted things and made my own lore, my own reason they came back and my own reason they remain. I had fun with the book and wrote ghost stories, and stories about fanaticism, and I tried to make this world different than any people had read about before. There is hope in that book but it’s bloody hope and it’s a damnable thing because hope can be jagged, like broken glass, and it can hurt you to have it.

Neither book has gone on to do much.

Neither has sold very strongly, but they have sold.

People have read them.

I love those books dearly.

I love all of my books dearly but those two took a long time to put together. A long time living with them and bringing them to life. I can’t say that either will do much of anything. They are awfully big and they are not inexpensive. They are an investment.

They are investments that I think are worth the time and money an effort though.

There is light in that darkness.

Pete, while a monster, is one with a heart. Even if he hates that he has it.

With my zombies I tried to do things that were at least a little different.

As I endeavor to put together another novel, another old story that sat abandoned long enough, I remember my novels. My lost babies that found their way home.

(Both books are available through links in my bookstore or through Amazon.com).