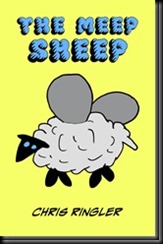 When I first started writing the very first story in the MEEP SHEEP universe there was never meant to be anything more than one story about flying sheep and a princess searching for answers as to who she was. The idea was first about the Bumble Kitties, animals that were part kitty and part bumble bee, that buzzed in unison. The sheepies came later. As I started getting into that world though I began to realize how big this world was. I started seeing the people, the places, and the many, many creatures.

Oh, and the witch.

There had to be a witch.

There had to be a dark force that worked in the shadows to try to keep the world in darkness.

A big story with big characters and big stakes.

The main character, Princess Messy, inspired by a friend, felt like a great stand in for the struggle all artists face – told to grow up and focus on becoming an adult while knowing that to do so will be a betrayal of everything you are. So suddenly a story about good and evil became something more, became the story about what it means to find oneself and what we sacrifice to do it.

It’s still a fantasy, a dark fairy tale, sure, but the point too was to show that sometimes we have to trust ourselves in order to defeat the darkness.

I never set out to write a full book about this world, and certainly not more than one book, but I was compelled. I fell in love with this world and its people. Another character, Ashley Pickles was patterned after another friend, one who is gone now, and it means the world to me to know he’s a part of this world. His too was a lynchpin character for things, an artist that faces the growing reality that he may no longer be the focus of attention and what that means to his ego and his craft.

That was as much of the fun as anything else, telling the stories beneath the stories.

As I have said time after time after time this was never meant to be a series but I found that the more I explored these worlds where monsters lurked and friends frolicked the more I wanted to keep pushing outward to see what else there was. I could suddenly see why people fall so deeply in love with their worlds and want to keep exploring them. There’s something be said about just being able to dive into that place that makes you think of comfortable clothes. For me it was the idea of exploring what came next. What happened after that first book. First There was the history of why that world was how it was, and  how the people and creatures came to be. Then too there was the stirrings of What Next.

When I first started writing that second book it was as disparate short stories that I put on Tumblr as a way to exercise my writing and to tell those historical stories of the Land of Man. Since I was a kid my writing had always focused on horror and very dark stories. Those were the tales I felt I had to tell and enjoyed telling but in exploring this fairy tale land I found darkness still lingering even in these tales and more than that, I found that I enjoyed discovering the light as well. I liked telling stories that weren’t like everything else I wrote. It was writing these stories that reminded me why I loved writing in the first place, stretching my skills, my imagination, and forced me to work outside of my comfort level. I wasn’t sure that I wrote effective scary stories but I COULD write them, and they came easily. Trying to write these other stories made me grow my skills and talents.

It forced me to write without curse words, without over the top violence, and without going ‘full dark’. Sometimes we get the best work out of ourselves when we’re willing to take risks and take chances. There’s a sort of survival mechanism that happens as a writer (or arny artist) that makes you call on your skills and talent as you work out how to move forward.

Too often we get caught up in our own habits and ruts. There’s nothing wrong with liking a certain style, or a certain genre, but without pushing ourselves we never develop new talents for telling stories. If we aren’t able to look past the narrow view we have always held we can’t speak in the tongues of the people we want to bring to life. What I found in writing these books was my love of simply telling stories. It forced me to grow my skillset and hone my storytelling. I wasn’t able to lean on the things that I had before so I had to challenge myself to tell the story a different way. And in saying that I was also able to find ways to tell stories I wanted to tell, even with a growing darkness that approached horror at times.

We forget how magic it is creating something new when we fall into our habits and don’t see past them.

I hadn’t meant to tell this story of a world grappling with a dark past and with the dawn of a new era but in exploring this land I renewed my love of telling stories. It let me see I could tell other stories than what I was used to and gave me confidence in being able to do that and it let me speak to audiences I may never have reached before.

WIthout the MEEP SHEEP trilogy of books I never would be where I am as a writer and dreamer because that world would have been left to die within me while I focused on the same things I had before. It was only by looking deeper and further that I was able to see what else I could do when I wanted to.

There are stories in all of us, waiting to be told, and sometimes it’s those stranger tales, those that are unlike anything else we do, that will tell us the most about ourselves.