Convention life is a very strange thing. For the time you are there – three-ish days usually – it is as if there is no world outside of the con. You don’t see the news until the show is over for the day. You don’t know the weather unless you go outside. And the usual day to day things that you normally keep up on with your friends is lost in the blur of the convention. For that time you are living in a sort of bubble where you are always thinking about the next day’s show, the sales, how your space is set up, and on and on and on. For that time you are living the world of cosplayers and celebrities and travel and hotels and blah, blah, blah. It’s one of those things that until you sorta dip into that world it’s hard to really appreciate the craziness that comes with it.

Conventions crowds are a lot like the crowds you find at any fan-centric event, be it a sporting event or concert or something else. You have all of these people who come from different walks of life, from different world and they all come together at one spot because they all have that fandom in common. Such is the world of the convention. With comic conventions you get more variety because they are catering to not just one genre but all of pop culture now as well as comics. These worlds become safe places for everyone to come together under one umbrella, where you can fly your freak flag and enjoy yourself without the judgmental eyes of society on you. For that short time you can be you, be into what you’re into, and it’s celebrated.

Geeks and nerds and weirdos can still be judgmental jerks, let’s face it. Worse than that, they can be sleazy jerks. As much as we all love to be in a place where we can embrace one another’s weirdness and passions we also are still pack animals at heart and still feel the need to shun the ‘outsider’. Not geeky enough? You shouldn’t be at the con. Too mainstream? Why are you even here? That’s the crappy thing is that conventions are supposed to be safe places for fans and we are taking that safety away, and it’s not just the casual condescension and ownership some fans feel but the vile sense of entitlement and objectification of cosplaying. Once upon a time people who dressed up like characters from movies, games, anime, television shows, or whatever, were looked at as the geekiest of geeks and the biggest of losers. Over time we have finally embraced this subculture and are starting to recognize and appreciate it. As well we should. It takes a lot of time, dedication, and money to create some of the costumes people put together. Alas, just as we are putting the spotlight on cosplay the lowest and most vile of fandom has decided that sexy attire is tantamount to an invitation to ogling, coveting, and molesting. It’s thankfully not rampant but it’s too casually accepted. The random stranger that stops the sexy cosplayers to take their picture as the same photog passes up a dozen other costumed fans. Maybe they like those characters…but probably they just like the skin. And heck, sleaze is nothing new and it’s sadly something that most of the fans dressing up expect. It’s when it goes further. The fan that wants to pose with the sexy cosplayer and then ‘accidentally’ touches the person on the butt, or chest, or anywhere. Oops! Hahahaha! No harm, no foul! Right? Yeah…right? Except we’re better than that. A sexy outfit, out of context, is ‘just’ a sexy outfit, but at a con we should at least appreciate the context and understand that it’s representative of a character. We don’t have to like cosplay, and some don’t, but we need to protect it. We need to protect the cosplayers. We need to let them and the sleazebags know that the old ‘they shouldn’t dress like that then’ chestnut doesn’t fly now and it never did. If we can’t respect ourselves and our fellow fans then why the heck are we even bothering with conventions in the first place?

Respect is a big thing though that really is lacking at too many shows.

A lack of respect of fans, of guests, of cosplayers, of vendors, and of artists.

Vendors and artists too often are at shows for themselves, are about themselves, and anything else is a distraction from them. Too many treat the space like a dorm room and leave a gnarly mess, or they will pack up well before a show is over – because they are bored and wanna leave – or you get the great ones that have displays that are so big they trap you into your area so you have to exit and enter your space by ducking under your table, which looks great to people you are trying to pitch your wares to. Heck though, I saw a female fan run up behind an actor that was in a hugely popular show and she grabbed and hugged him. Not cool. Too many will shrug that off but if it was a male fan doing it to a female guest it would be a much bigger, much scarier moment. Fans need to respect the guests. Again, you don’t have to like them, or their prices, or their attitudes, but they still deserve to be treated like a human being, not as property. I don’t know if it’s the prices that celebs charge these days or just a general comfortableness with them but man alive we really have come to treat these people like cattle. We love them…until they annoy us and then they are trash to us and we’ll make sure everyone around knows it. Yeah, they’re paid to be at these shows but it’s gotta be weird to sit in one spot for hours at a time having to be consistently excited and happy to meet everyone, whether you are tired, sad, bored, frustrated, or anything else. You’re performing, live, and you better be good, darn it. It ain’t brain rocketry, sure, but unless you’ve worked as a receptionist or retail you don’t quite appreciate what these folks are going through.

I’d love to blame all of this on big shows, and I am sure it’s more rampant there as the whole atmosphere is more impersonal, but sadly, it’s becoming regular practice at all the shows. Fans are getting rude and selfish. Celebs and guests are getting more expensive and impersonal. Vendors and artists can waver between cold indifference and carny barker schtick. Sometimes I wonder if the fans attending and people building these shows know what a convention is. The celebrity and costumer ogling is nothing new but it’s the anger people go to shows with that is disconcerting. The ‘been there, done that’ attitude affected by teenagers who are bored by everything. It’s like – go to shows that have something for you and just avoid those that don’t. Simple, right? Not for some. Instead they go to the show and grumble, and complain, and act like spoiled children even though they knew going in that there wasn’t much to offer them at the show to begin with. These were meant to be places where we could all get together and share our fandom and while they still are, they are also becoming too much about business and too little about the ‘scene’. And that hasn’t helped things.

There’s room for shows both large and small.

Room for fans both passionate and casual.

And there is room for all of us if we can remember why we’re all at the shows in the first place – to have fun.

To be in a safe place where we can have fun, preferably with our fellow fans.

A place where we can show off all of the work we did on that costume, or drawing, or book, or movie, or props.

A place where we can make new friends, meet our favorite stars, fall in love with artwork, get that collectible we’d had our eyes on, and just be a part of a world that understands why you’re fandom is so passionate.

We don’t have to all like the same things, or have the same intensity of our fandom, we just have to respect one another, a thing that’s very basic, but so darn hard for so many of us to remember. 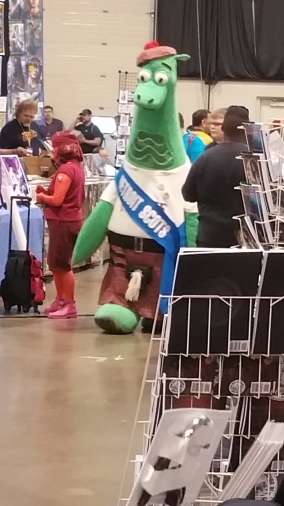