The world loves a comeback, isn’t that what they say?

Well, they say it, but it doesn’t always make it so.

We love to see someone rise, the notion of someone almost willing their way upward.

More than that though we love the fall.
We love to watch people fall back to earth after they rose, some sick sort of jealousy and envy twisting in us and making us take glee in someone’s destruction.

Ah, but the comeback, we do still love that, don’t we?

The idea that you can rise again, a phoenix, and find a way forward.

It’s sick, the joy we take in the falling, but at least we can sometimes find it in ourselves to cheer as they rise again.

Such is the case of Flint and more specially Flint’s CAPITOL THEATER, an old-school icon that had haunted Flint like a revenant for decades, shrouded in history and promise with no hope in sight. The theater was built in a style to make one think of an outdoor theater, stars and all, and to see the old pictures it was a breathtaking sight. The thing is though that things of beauty take a lot of upkeep and without it those things can turn to the commonplace and ordinary. Even ordinary the old gal could make your mind reel. Long hallways, high arches, ornate carvings, a grand staging area, there was so much to see and admire but by the time it went from vaudeville to playhouse to movie house then to rock house it had become part of the background of a lot of lives. It was still beautiful but it wasn’t as special. It wasn’t remarkable any longer.

I was introduced to the Capitol from friends I had made when I was twenty. We were young and aimless and the best place to waste time was the mall, and the best way to waste it was with friends. We spent hours sitting in booths in the food court, talking and joking and just being, well, kids. Old kids, but kids nonetheless. If it was the weekend that meant shows at the Capitol. Mostly ‘hall’ shows in the Lobby, the area that had once been grand entrance to the venue but which was now just another place for local bands to play shows. There was a bar in the back and the bands played towards the front and while some went to see the bands, most of us went to hang out. Hanging out at the Capitol for us meant we were upstairs by the women’s restroom where there a large couch where people would do the same thing they did at the mall, only pairing off from time to time. It’s been so long, twenty-three years, that a lot of those days is lost to me. My own memory slipping away without the aid of any chemicals or outside influence, but I still have memories. The couch up there was gnarly so a lot of us sat on the floor or stood. I remember seeing bigger, regional acts in the Lobby because the people who managed and owned the building didn’t want to mess with the theater. I saw only a handful of theater shows at the Capitol but they were great. The MONSTER MAGNET show I saw there stands as one of the best shows I have ever seen, singer Wyndorf becoming like a religious figure at the end, arms outstretched, psychedelic images behind him, and the crowd in his palm. The Capitol was our clubhouse, our hang out. It was a place where friendships were made and died and acquaintanceships blossomed. All of us were trying too hard to be cool, to be different than we had been. I remember a friend’s first acid trip outside in the parking lot and how many of us messed with him during it. I remember meeting my first girlfriend there, in the parking lot across the street. We were both awkward but it was that sort of magic you feel when you’re young and you don’t think about what things lead to or what the future is. It was a time when nights seemed to last forever and the later it got the more of who you really are was revealed.

I think my last time at the Capitol that I can think of was going there on a Thursday night, a college night, to do a video report for my multicultural college class. It was a super lazy and super crappy way to do the project, the theme my partner and I were angling at being that bar culture was a subculture (Which is sorta is, actually). We went and interviewed people and it was weird and sad for me. I wasn’t comfortable around people that were drinking and it was an odd atmosphere. It wasn’t MY Capitol. It was theirs and I hated it. I hated that it was little more than a bar.

The Capitol died another death in the late ‘90s when it was going to cost too much money to keep it up, to fix it, and to make it special. So they closed it. At the time I don’t know that I cared. My friends had all migrated over to a new venue run by the person that ran the old one, a place called the Flint Local 432. It was the same thing, bands, music, hanging out, but no drinking, no smoking, and no drugs. Instead of hanging inside we’d hang outside, just because we were cheap. I didn’t much mourn the loss of the Capitol. It was just sorta there. Gone but there. It wasn’t until years later, well into the 2000s, that it hit me, what we were missing. During a celebration of the city of Flint they opened up the theater to show cartoons and it reminded me of an earlier time in my life and I suddenly missed the heck out of the old place and what we’d let it become.

It only compounded things when I moved downtown to an apartment that looked out towards the Capitol, which was my back neighbor. I watched through the years and dreamed What If scenarios. The owners didn’t seem to have the desire to sell and lacked the ability to fix it so it sat. And it became just part of the background of the city. As years passed people questioned whether, like many of Flint’s old icons, it should be torn down. It seemed more and more likely that was its fate until Hollywood came to town and shot film around it. SEMI-PRO is far from a classic film but for those of us in Flint, it was a fun time. I remember watching Will Ferrell film the scene in a dumpster from the roof of our apartment building (something we were told was ‘uncool’ by a PA). They were in the city for just a few weeks but there was a buzz with them here. An excitement. And suddenly we were all looking at the Capitol again and asking – What If.

When the big money started re-structuring, and rejuvenating the city’s downtown the Capitol became a sore thumb. It was a piece of our history, a vibrant piece, that had been neglected for too long. Eyes turned towards it and tongues wagged as people wondered what it would take to raise it from the dead. Funds were sought. Donations were given. It was going to take a Herculean effort though to fully realize what the space was and for that to happen the building had to be sold. With so many pieces moving it became a When and not If and when the Capitol was finally sold the hopes of so many of us were one large step closer to realization.

Flash ahead to last week and the grand unveiling of the space and I don’t lie when I tell you that as I listened to people talking about it at the ribbon cutting I became misty-eyed because Flint has willfully walked away from so much of its history and so many of its beautiful buildings that to see the Capitol resurrected, more beautiful beyond imagining, was awe-inspiring. After so many years sitting empty as the city seemed to fall apart around it the Capitol returns to serve as a jewel in the crown of the city, a focal point where people will come from near and far to see concerts and other performances. It truly can be whatever the owners and programmers want it to be. My hope, my deep, sincere hope, is that the people who own it, who own another large arts performance facility, will program it to reflect that we are now a college town. They need to reflect that we need to retain and bring in young people to the city if we are going to keep growing. They need to program to reflect that not everyone is upwardly mobile, some are hanging on but still deserve to see shows and treat themselves. They need to embrace more of the city than their other facility does or else they just have a very pretty headstone for another era of mismanagement in the Capitol’s life.

Of all the comebacks we are seeing in Flint it is truly the Capitol that makes me smile and brings me hope. This place can be a reason for people who had forsaken the city to return and for those that never had a reason to come here to visit. In doing our weird shows since 2011 I have learned that people will come here, if there is a reason. Let the Capitol be that reason and let us be wise enough to give those people to return, and to stay. 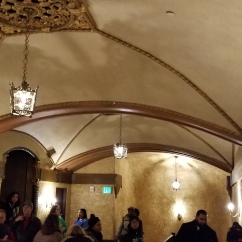 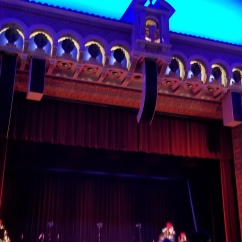