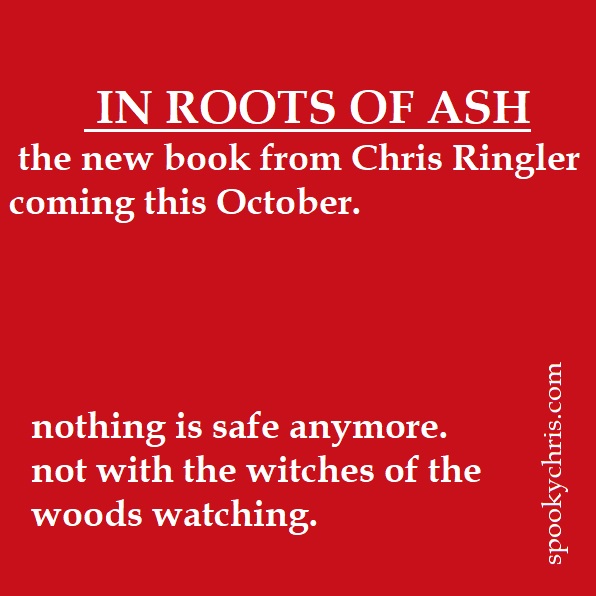 When I started writing the first stories that are at the hear of IN ROOTS OF ASH I was writing to tap into the mythos of the woods. I grew up in an area that had two wooded areas and we played in them all the time. We never were afraid but when we started going back there at night it was hard not to have a chill run down your spine. I loved horror but had never really grown up surrounded by the myths of the woods and the wilds. But it’s hard to deny the power of the woods, where nature stands above us and watches silently. For me, the Sisters Six were just a way to capture the creepiness of the woods and to personify the idea of witches and power. It’s funny because, while I can’t recall which story was first, I knew I had something with the Sisters because they really spoke to me, the notion of these creatures that had powers to change not just their environment but in some ways reality.

The stories of the Sisters Six, six trees standing in the middle of a thick woods that can trade wishes for pledges of loyalty, were more about showing the power of need and want and desperation and the awful prices we pay for those things. I had been writing about the witches for a long time when I realized that they needed an adversary, a check to them, the Woodsman. The Woodsman is no friend to humans though, no, he is simply an enemy to the witches and he will do whatever he can to keep them in check.

With the novella that ends IN ROOTS I wanted to tie the stories in the book together, get to the heart of the mythology of the Woodsman and the Sisters, and wrap things up in a way. The novella allowed me to tell more stories about the region the book is set in, small town Michigan, and it also allowed me to link some of my other books together. It’s the navel gazing of a writer, of THIS writer, and I know it, but I really do love when you can read things and see how they connect to other stories, characters, and worlds. I have been writing for a long time and it’s fun to make those connections. I was able to talk about my book ROADKILL and my book A SHADOW OVER EVER here and to get into more of the history of that area. The novella also let me get into characters that we could follow a little longer than we do in the short stories. Two women who have been chosen to play roles in a larger war they don’t know even exists.

I know that IN ROOTS isn’t a book for everyone, like all books, but I do like it quite a bit. I got to play around with a few things in the book and while there’s always more to say and different ways to say it I like where the book goes and what it says. I like the imagery and I feel like I captured a lot of what I wanted to with the Sisters, the Woodsman, and their world. What’s funny is that in editing things for the book I came across a story that was meant to add even more to the mythos but which just jumbled it a bit. Sometimes too much is just too much.

The photos for the book kinda seemed obvious though they didn’t turn out exactly like I thought they might. I had wanted to capture trees on fire, the notion of fire being a big part of the book. I didn’t want to use someone else’s art so I figured I’d take my own photo – in miniature. And my reasoning was sound and my execution wasn’t bad but it’s hard to figure how fast something will burn sometimes and I had just a few moments. I like what I got though.

The interior was a nightmare. I had the worst time using the template for the book and it took forever for it to behave. I want my books to stick to a sort of form factor just so they all look OK on a shelf together but man, getting the format to play nice was no fun. I did get to do a few fun things with the book though and tried to give it its own feel. That’s part of the fun and power of doing it yourself is that, while it’s a pain, you do control how it looks and comes together. I love that aspect of it.

The book comes out October 1, 2019 and I am excited for those that have an interest to discover it for themselves.